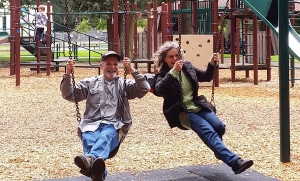 We played at the park last weekend, after a memorial celebration honoring one of our family members who passed on. It wasn’t overly solemn, nor did the rifts between us show themselves much.

After enjoying the potluck meal, Jerry and I headed to the playground with our grandchildren and grand-nephews. Our son-the-father-of-several gave his dad an underdog on the swing, and for a few moments our aging bodies enjoyed giddy playfulness before aches and pains slowed us down.

It’s not a shocker. My family has issues. Whose doesn’t, right? But did you realize God had the first dysfunctional family? The genealogy in Luke 3:38 says, ” . . . son of Enosh, the son of Seth, the son of Adam, the son of God.”

Adam and Eve rebelled against God, and their descendants carried it on, getting themselves into all kinds of trouble.

I remember another verse from the book of Luke, where a woman calls out to Jesus publicly, saying that his mother surely is blessed to have a son such as he. His response was to turn her attention to the greater blessing, hearing God’s words and doing them. That means it doesn’t matter how perfect your children are, blessing comes from doing God’s will.

“Now while Jesus was saying these things, one of the women in the crowd raised her voice and said to Him, ‘Blessed (happy, favored by God) is the womb that gave birth to You and breasts at which You nursed!’ But He said, ‘On the contrary, blessed (happy, favored by God) are those who hear the word of God and continually observe it” (Luke 11:27-28 AMP).

Mary was chosen by God to be the mother of his Son. She was blessed because she heard God’s promises and believed them, which prepared her to receive the difficult assignment God gave her. Her cousin Elizabeth said, “Blessed is she who has believed that the Lord would fulfill his promises to her!” (Luke 1:45 NIV).

The reward will come

My assignment is to listen to God, believe what he says, and do as he directs. For Jerry and Kathy, that meant raising four children, lots of foster kids, and now loving our grandchildren. He may give others a completely different assignment as they walk through life. We’re not all called to raise his holy Son, after all. Thank you, God!

Raising children is a temporary job. Loving God, listening to him and doing his will, is forever!

How kind our Father is, rewarding us while we still walk on this planet and before we’ve fully overcome our sinful natures.

“Behold, children are a heritage and a gift from the Lord. The fruit of the womb is a reward” (Psalm 127:3 AMP).

Do you ever feel you’re at the end of yourself when it comes to parenting?  When my infant daughter suffered with colic, it broke my heart that I was powerless to help her. She would scream and stiffen her tiny body, even when I’d done all I could to comfort her.

One night, I was so weary I feared I might trip and fall with her in my arms. I laid her in the crib, dimmed the light and closed the door, utterly defeated. I hated leaving her alone in her pain but there was nothing else to do.

Thankfully my daughter, and her mother, survived colic. What helped me keep going during the early years of parenting was placing a high value on spending time alone with God every day. And this hasn’t changed through the years of foster parenting and grand-parenting.

I imagine my life is like a bucket. If I’m not careful to keep it full, I may not have what I need to function as I wish – and that’s just miserable. I also won’t have the abundance required to share with others. That would be intolerable to me, because I want to live giving my best.

Prayer is my lifeline

For me, this isn’t the same as needing “me time.” In fact, it’s “he and me time.”  I don’t need more me things, I need to drink from the water of life.

“Then Jesus declared, ‘I am the bread of life. Whoever comes to me will never go hungry, and whoever believes in me will never be thirsty” (John 6:35 NIV).