Things seem to get stirred up around Jesus, the Son of God. In John 3 an incident is recorded where Jesus is once again the subject of a disagreement. (The John in this story is known as “the Baptist” and is not the writer of the book of John.)

“…Jesus and his disciples went out into the Judean countryside, where he spent some time with them, and baptized. Now John also was baptizing at Aenon near Salim, because there was plenty of water, and people were coming and being baptized” (John 3:22-23 NIV). 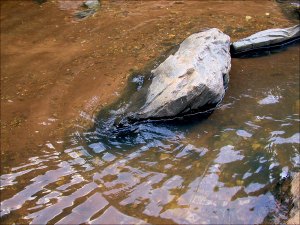 “An argument developed between some of John’s disciples and a certain Jew over the matter of ceremonial washing. They came to John and said to him, ‘Rabbi, that man who was with you on the other side of the Jordan—the one you testified about—look, he is baptizing, and everyone is going to him” (verses 25-26).

Since they were concerned with ceremony, they likely felt Jesus wasn’t doing it right. And they clearly considered him an unwelcome competitor.

“To this John replied, “A person can receive only what is given them from heaven. You yourselves can testify that I said, ‘I am not the Messiah but am sent ahead of him.’ The bride belongs to the bridegroom. The friend who attends the bridegroom waits and listens for him, and is full of joy when he hears the bridegroom’s voice. That joy is mine, and it is now complete. He must become greater; I must become less” (verses 27-30).

John, the “best man,” knew it was time to withdraw from the spotlight, and he had complete joy in fulfilling his assignment from God.

I'm a contributing author of Jesus Talked to Me Today, available at Amazon.com and Barnes & Noble.