Jerry and I attended his 40th high school reunion last weekend. Mine was a year ago, and my intolerance for loud noise has either intensified or the SEHS alumni are a noisier bunch than the CHS crowd. Making a ruckus just goes with having a good time, right? 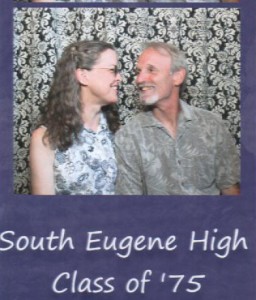 Like a tidal wave, people swept to the opposite side of the warehouse when the band started up. The loud people took over the universe and the quieter ones sought their escape. I don’t remember hearing a complete sentence for the rest of the evening, though I watched a lot of mouths moving.

Sunday morning my discomfort continued as I kept my head down and hands busy, unfolding the edges of my recently purchased used Bible. It must have been that my sensors were overloaded by the noise from the night before, I don’t know. It was just hard to respond to the speaker without my defenses up, feeling like my ears and head were being assaulted, though I appreciated what he had to say.

Hyperacusis is a condition where a person is more sensitive to sounds that don’t normally seem loud to people. I read that hyperacusis, with or without phonophobia (fear of certain sounds), occurs in 10-15% of the population. It can eventually lead to social isolation and depression.

I’m careful unloading the dishwasher so I don’t stack dishes or close cupboard doors too loudly. I use ear plugs in church, not only with the music but when the pastor is speaking. Being near my husband when he sneezes makes me jump, and staying asleep at night is a challenge.

The heartbreak comes when I dwell on things I’ve lost, or fear losing, like singing with my family as we lead worship together (I can’t handle the sound system), and on my concern for the future as symptoms worsen.

I Won’t Give up Hope

It’s pretty easy to get caught up in my worries.

And I often consider this one, too: “For the Scripture says, ‘Whoever believes on him will not be put to shame’ ” (Romans 10:11 NJKV).

I will never regret trusting him. I’ve never heard of anyone coming to the end of life saying, “I wish I hadn’t trusted Jesus.” There’s no downside to following him, though we may struggle along the way with parties in uncomfortable warehouses. He will not fail to sustain and rescue us.

Kathy Sheldon Davis, contributing author of Jesus Talked to Me Today and a finalist for the Oregon Christian Writers Cascade award, lives with her husband, Jerry, in Oregon's fertile Willamette Valley. Kathy enjoys mentoring and editing for other writers, making strangers into friends, and celebrating holidays with her extended family. She has written for Pathways—Moments with God since 2016 and posts devotionals on her blog at kathysheldondavis.com .